I asked my students to watch this YouTube video on Genie, who was a child raised in isolation by his father. She was 13 when she was discovered. She could barely stand and so thin and frail. She cannot speak. She was locked up in a room and was tied to her potty chair. When she was brought to the hospital she had callous in her buttocks from sitting too long in the potty chair. She was like a blind child, who seems to experience the world for the first time.


This topic on Genie were the result of our class discussion on Social Interaction and the importance of interaction in the survival of humans.

Babies and children in particular need interaction from significant others; their parents, siblings and even relatives and neighbors. It is their basis for the formation of their personality. Through language babies learn the everyday rules of social interaction. They can also get cues from facial expression and the tone of the voice.

Children needs warm, love and care especially the love coming from the mother. That is why massage therapy is important in pre-mature infant. There was also a study that a mother's voice is recognizable by an infant because the baby prefers the mother's voice than any other voice.

As a mother, I always try to talk and interact with Kiara. There was even a time when I suspected that she had autism when she was still a baby because of her lack of interaction. But it was just another anxiety attack on my part.
Now is she laughing and smiling and making everyone around her happy. She is my little sunshine.

I just can't imagine someone or some parents hurting their children.
All children are dependent on the adult to provide for all the needs and it's not all money. What is even more important is the love and care that you can give to your child.

Email ThisBlogThis!Share to TwitterShare to FacebookShare to Pinterest
Labels: Genie the Deprived Child

Where to go in Dumaguete: Silliman University 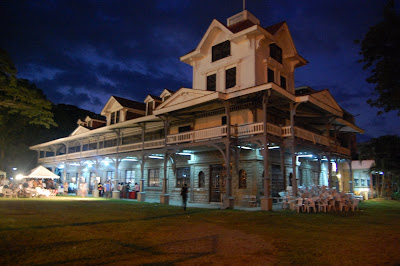 This is the famous Silliman Hall in Silliman University in Dumaguete City. We went there August 12 to August 15 to attend the Psychological Association of the Philippines National Convention. It is good to see psychologist gathered and convene with it's theme “Character Strengths of the Filipino: A Positive Response to Current Challenges.”

It is my first time to attend an event like this, I was excited to see my old teachers and famous personality in Philippine Psychology like Dr. Lourdes "Honey" Carandang, Regina Hechanova, Allan Bernardo and others.

Attending the convention inspires me to do relative researches in psychology just like their presentations. I always keep in mind my daughter, Kiara, that I want to make a better place for her when she grows up. Psychologist has a role in country building and I would really want to make a positive change in our country.

The influence of the recent death of Cory Aquino was manifested in the convention, since the theme was more on values and strength, she was depicted as a person with character and really an inspiration. A true leader.

Going there made me a little broke, hehehe, because of too much Silvanas and Sans Rivals which is a delicacy in the city. I will miss the sweets and the gentleness of the people.

I might come back and bring back a loadful of silvanas..
Posted by Beibi at 4:05 PM No comments:

I have fallen in love
With the same woman three times
In a day spanning nineteen years
Of tearful joys and joyful tears.

I loved her first when she was young
Enchanting and vibrant, eternally new
She was brilliant, fragrant and cool as the morning dew
I fell in love with her the second time

When first she bore her child and mine
She's always by my side, the source of my strength
Helping to turn the tide…
I fell in love again with the same woman the third time

Looming from the battle her courage will never fade.
Amidst the hardships she has remained
Undaunted and unafraid
She is calm and composed. She is God's lovely maid.
Posted by Beibi at 1:01 PM No comments:

Email ThisBlogThis!Share to TwitterShare to FacebookShare to Pinterest
Labels: I Have Fallen In Love (With The Same Woman Three Times) lyrics, Jose Mari chan

I used to remember this song, and I still memorized some of the lyrics and I know the melody.. Very touching, I am one of those who experienced the Edsa revolution when I was a kid, my uncle who was a soldier lived in Camp Crame and I remember seeing them (my cousin, Beng) that day wearing their pambahay because they walked from Crame to Pasig. They have canned goods which was given by the people in the street. They left their house in Crame fearful there will be a war.
Now, I have false memory of joining the Edsa Revolution when I was a kid but it really did not happen. I was in grade three then and I know I had a collection of Ninoy pictures which was a project in school. I was still young but it ignite something in me and with Cory's death the memories keep on coming back, I find strength as an individual first and then a mother. It was a legacy that she gave us hope. I hope something will change with her death and this is not just another drama show..

I just watched the ABS-CBN Umagang kay Ganda, and tried to write down the lyrics of Jaime Rivera's song.
I was close to crying when I was hearing this but I only caught the chorus of the song.

Everytime I watch the tribute to Cory I keep on crying, I just can't help it, she triggers a lot of emotion from the Filipino people, whether spiritual, maternal, political, national or personal you can relate to her, for me especially as a mother and her being religious. I just wish and "pray" that I could also be as prayerful like her. She is really an inspiration.

Farewell, dear mother..
Posted by Beibi at 8:11 AM No comments: