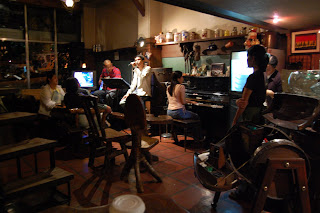 It is quite rainy today and yesterday, reminds of the weather in Baguio when we went there last June. It was raining in the afternoon and it stopped at night. So what else can we do but curl and lay in bed during the rainy aftrnoons. But when the night strikes, we put on our jackets and head straight to Kaffee Klatsch. It was a discovery actually, recommended by one of a young professors attending our seminar.
Off we go and try out this secluded coffee place to taste thier famous Baguio Beans. 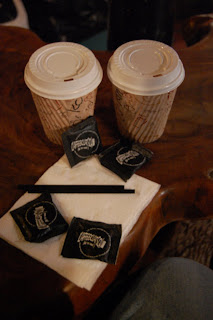 Hmm. I could still smell it. It brings me back to the cozy place, acoustic music and the coolness of Baguio. Hot Coffee. Coolness.
Posted by Beibi at 5:29 PM 2 comments: 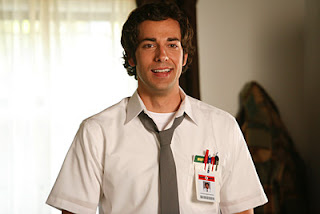 Now, I married a computer expert and he married a psychophilic. I wonder what would become of our children.
Posted by Beibi at 1:10 AM No comments:

Having a Baby and Losing It

It's been six weeks since I had a D & C, they keep on saying this without telling me what it is. So I checked the internet and found out that D and C refers to dilatation and curettage. "It is a procedure in which the vaginal canal is held open with a speculum and the cervix is dilated with a metal rod. A curette is then passed through the cervical canal into the uterine cavity where endometrial tissue is scraped away and collected for examination."

I was so innocent with what happened to me, I didn't remember that a speculum was inside me, I thought it was just a bad dream. I never imagine it could fit inside, I also could not imagine the OB's hand fitting inside my vagina, hmm of course how can the baby get out?

Now after six weeks of resting ang recovering I am starting over. Trying to forget that I lost my baby. But I was not completely well I guess. Recently, I watched "Paano Kita Iibigin" and I was crying and affected by the movie when I saw a mother taking care of a sick child. Will I ever be a mother again?

Now, I am focused on parenting our Shih Tzu dog, Cassie and I am trying hard to be a good pet owner to her. I realized that if "you give a little love, it all comes back to you". This quote is for everybody including animals, after bonding with Cassie and making her sleep, she is starting to cuddle me and stay beside my side of bed. Cassie likes Irwin more because he plays with Cassie so they sleep together but not with me. I am surprised when Cassie for the longest time finally sleep beside me.

I am confident that I am going to be a good mother.
Posted by Beibi at 7:59 PM No comments: