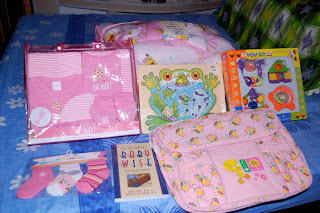 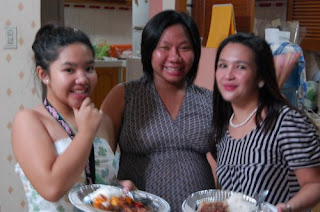 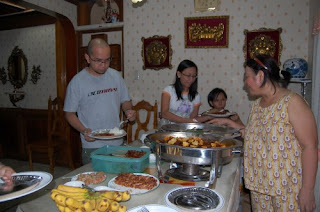 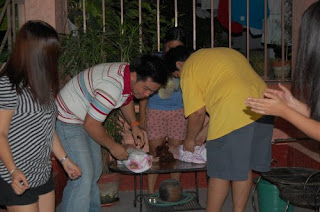 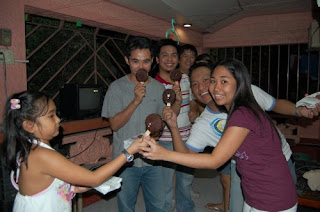 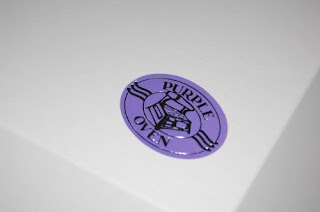 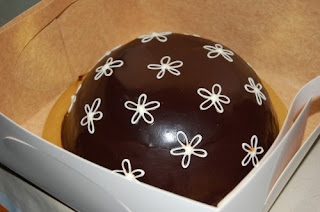 Our baby shower was held last Saturday, May 3 instead of April 26 because my parents were unavailable at that time. May 2, my maternal grandmother died, I was worried if I have to postpone it again and go to my grandmother's wake but of course I can't because of my condition.

We had mechado, blue marlin, dinuguan, barbeque, kikiam, shomai, maki, peachy-peach and fruit salad. We even bought a dome cake from Purple Oven. We even had a game with a mother-father pair where the father would try to dress up a baby doll and put diaper and the mother should remove it. We have two groups with 3 pairs, the group has equal number of mothers and the "father" are all inexperienced.
I was with the group of Irwin's cousin and we lost the in the game. I never though putting a diaper and dressing a baby could be that hard. We could hear the baby doll's head banging on both teams. Hahahaha! The price is a Dilly Bar from Dairy Queen and based from the pictures, the winners liked their prices.

The guests left at around 10pm and my friend stayed and sang videoke with my relatives until 3am. So we slept around 3am. It was a fun and enjoyable party!
Posted by Beibi at 8:26 PM

Is it your shower? Congrats. Happy Mother's Day to you.

Health Products For You said...

congratulations. :) hi, its irish, would you mind for an exchange links?