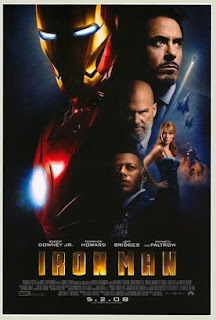 So what did you do yesterday? Me? We watched Iron Man at Eastwood Cinema, seems that we are not the only one who is excited to watch this new superhero film by Marvel. There was a long line to buy the tickets, good thing we were an hour early so we can get a seat on the next show.

The movie is fantastic! I enjoyed watching it, Robert Downey is a little similar with Johnny Depp in his actions and behavior. I can see some similarity. There was never a dull moment in the movie, no explanations that require lengthy conversation on how it started everything is action. It was fast-paced and the romance part is just a little hint on Pepper Potts and Mr. Tony Stark. I didn't realized that Jeff Bridges was the villain in the movie. He already looked so old.

Recommended for all ages. Watch it Now!
Posted by Beibi at 8:34 PM

it seems great movie. my hubby would like to see it with his friend this weekend.....

i never thought Robert Downey would be great as Tony Starks.. i was wrong, he protryes it beautifully