I was on vacation last Friday till yesterday, our entire family went to Palawan to celebrate my parent's wedding anniversary. I was anxious before the trip because I got my ultrasound result and it indicated that I had a minimal subchrionic hemorrage and that travelling is not allowed. Pero matigas ang ulo ko and I thought to myself that we planned this a long, long time ago at hindi pa ako sasama. In the end, I did go with them. I never regret that decision, I was able to get a full rest in the hotel and now I am back to work and I did not have any spotting or bleeding.

Our flight was at 8:00 and we arrived at Puerto Princesa an hour later, first stop is a lunch prepared by my father's friend in Narra, Palawan it was a two and a half hour drive from Puerto Princesa. We were already hungry so at 11:00 am we ordered food at Jollibee and arrived at Narra around 1:30 pm good thing we had eaten something. 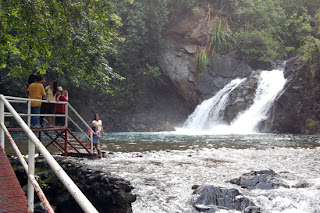 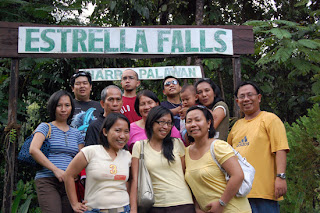 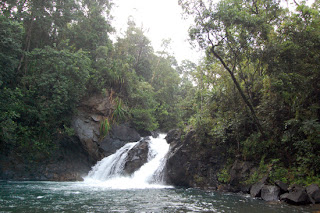 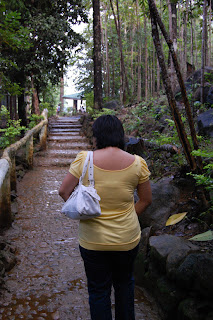 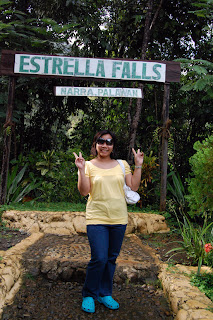 We went to Estrella Falls, it was a ten kilometer rough road drive to the falls.
It rained before we went there so the steps were a little slippery and the road was wet but we were able to see the falls and took some pictures, here are some shots of the falls shown above.
It was a relaxing place, sana if we arrived earlier and if it did not rained, baka naligo pa kami sa falls, ang lamig siguro ng tubig. Brrr. Sight seeing na lang ang pwedeng gawin..
Posted by Beibi at 3:47 PM

Nice lovely pics. I have never been to that part of Palawan yet. Hope to check that place when I go back there. Have a nice day.

uyyy... maybe i'd go back to puerto princesa just to visit that place :)

natatawa nga ako... worried ako about palawan because of the typhoons... ahehe...

hello mec, because of the typhoon the plane ride going back to Manila was terrible!

hi! this entry is very useful. may i ask if you stayed in narra, palawan or puerto princesa when you visited this place. my dad will be in narra and im thinking of places he can visit. how did you get there ba? commute or own ride? thanks.

you may email me your reply at mariaususera@yahoo.com.