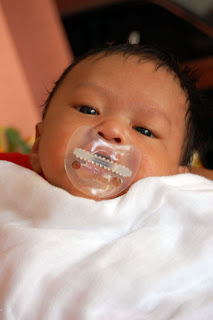 This is my nephew Arren Mikel, we call him Miko and he is only 7 weeks old. At a very young age his asthma appears in the form of Atopic Dermatitis. Asthma run's in my husband's family so I will not be surprised if my daughter will have asthma too.

Miko's asthma started as a form of rashes on his face and eventually into his scalp.
When they brought him to a pediatrician, the doctor automatically asked if anyone in the family has asthma. The doctor said it is atopic dermatitis and this is hereditary.

The pediatrician asked my sis-in-law to change the baby wash that she is using and used cetaphil instead. If the rashes persist, they will have to change the milk again.

So what is this Atopic Dermatitis? According to medicinenet.com

Atopic dermatitis is a chronic (long-lasting) disease that affects the skin. The word "dermatitis" means inflammation of the skin. "Atopic" refers to diseases that are hereditary, tend to run in families, and often occur together. These diseases include asthma, hay fever, and atopic dermatitis.

Atopic dermatitis most often affects infants and young children, but it can continue into adulthood or first show up later in life. In most cases, there are periods of time when the disease is worse, called exacerbations or flares, which are followed by periods when the skin improves or clears up entirely, called remissions. Many children with atopic dermatitis enter into a permanent remission of the disease when they get older, although their skin often remains dry and easily irritated.

Environmental factors can activate symptoms of atopic dermatitis at any time in the lives of individuals who have inherited the atopic disease trait.
Posted by Beibi at 11:03 AM

By the way, thanks for the greeting daw sabi ni Rain. ehhehe!

my daughter have it, but after 1,5 year, it was going better... don't worry, it will be gone if the baby is being older.